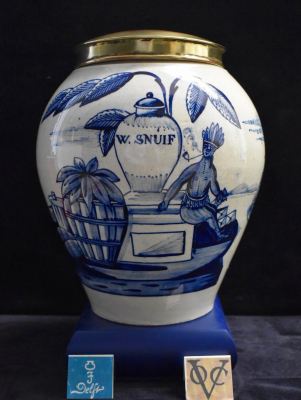 
The balustroid body of the tin glazed earthenware jars decorated in shades of blue  with a camulet-smoking Indian under a large tobacco plant with a large covered vase behind him, inscribed with W. SNUIF. Further a large barrel and bales of tobacco on the left inscribed with V.O.C. With ships on the background.  With brass cover. Marked on the bottom in underglaze blue with a bottle, JT & 19/2 for:
DE PORCELEYNE FLES   -  ROYAL DELFT
DELFT - HOLLAND     1876 - 1878
No year letter or painter’s initals.
No impressed mark in a circle with Joost Thooft & La Bouchere
Literature:
Only shown as from Piccardt, the former owner of De Porceleyne Fles.
Royal Delft a guide to the Porceleyne Fles by Rick Erickson on Pags 18 Fig 02 – 17
Delftware – History of a national product De Porceleyne Fles Pages 78-79 Fig.10.
De Porceleyne Fles. Wedergeboorte van een Delftse Aardewerkfabriek by Veen-Reflex Page 77 Fig.5

V. O. C.
VEREENIGDE OOSTINDISCHE COMPAGNIE.
Established   419 years ago in 1602.
The Dutch East India Company was a power full trading company that helped establish Dutch rule in what is now Indonesia. In 1602 the Dutch government granted the company a monopoly on trade between Asia and the Netherlands. The company also received broad governmental and military powers, including the right to rule territories and to wage war in Asia. In 1700 the Dutch East India Company had gained control of the cinnamon, clove and nutmeg trade in the East Indies. The Company had trading posts in many Asian countries and ruled parts of what are now South Africa and Sri Lanka and most of present-day Indonesia. 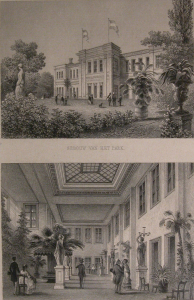 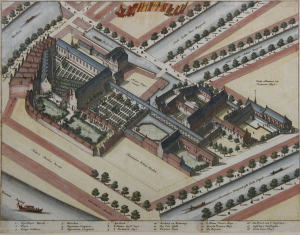 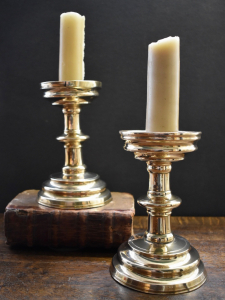