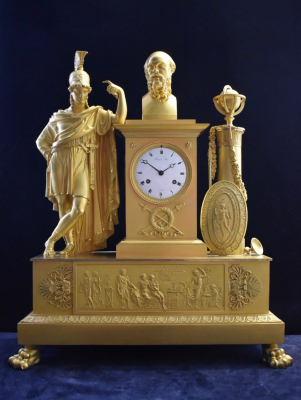 On the left the Athen politician and commander Alcibiades with next him on the column the head of his friend  the philosopher Socrates. On the right of the column his shield and spear agains a pillar with a globe. In the column the circular white-enamelled dial  with black Roman numerals and five minutes marking  and signed with Picnot Pere  a Paris. Standing on  spreading claw feet.

Alcibiades was a wealthy young man from one of Athens' most illustrious families.  After the death of his father he was raised by Perikles. In his youth he gained a reputation as a playboy and as someone who seemed to consider himself above the law.  Though still relatively young (born c. 450), he was a charismatic politician Alcibiades had several famous teachers, including Socrates, and was well trained in the art of Rhetoric. He was noted, however, for his unruly behavior, which is mentioned by ancient Greek writers on several occasions. Alcibiades took part in the Battle of Potidaea in 432 BC, where Socrates was said to have saved his life; he repaid Socrates at the Battle of Delium in 424 BC. Alcibiades had an intimate but (according to idealized ancient accounts) chaste relationship with Socrates, whom he admired and respected, and Socrates was in turn drawn to his beauty but refused to succumb to his youthful attractions. According to Plutarch, Alcibiades "feared and reverenced Socrates alone, and despised the rest of his lovers"

Socrates of the deme Alopece of Athens, was a Classical Greek philosopher. He is best known for the creation of Socratic irony and the Socratic Method, or elenchus. Specifically, Socrates is renowned for developing the practice of a philosophical type of pedagogy, in which the teacher asks questions of the students to elicit the best answer, and fundamental insight, on the part of the student. Socrates is credited with exerting a powerful influence upon the founders of Western philosophy, most particularly Plato and Aristotle and while Socrates' principal contribution to philosophy is in the field of ethics, he also made important and lasting contributions to the fields of epistemology and logic. 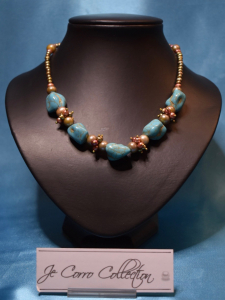 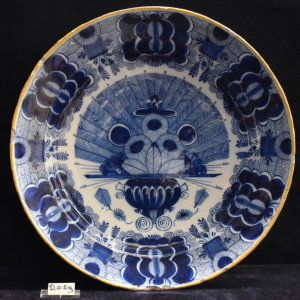 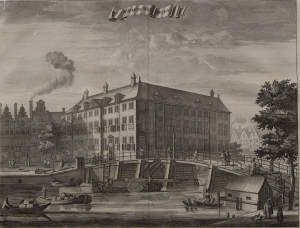