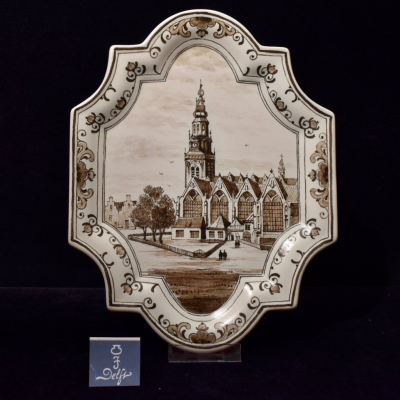 
The earthenware plaque decorated in the 18th century tradition as Encre de Chine in sepia with  the view of De Oude Kerk (The Old Church) on the Oude Zijds Voorburgwal in Amsterdam. Surrrounded with a rim with stylized flowers. After a drawing from Claes Jansz. Visscher, from: "Beschrijvingh van alle de Nederlanden” by Guicciardini. Published in 1612  in Amsterdam by Willem Janszoon Blaeu in 1612.

Signed on the back in underglaze sepia with:

The engraving shows the Old Church on the Oude Zijds Voorburgwal from the south. De Oude Kerk ( The Old Church.) was also called St. Nicolaas-kerk. From the history is known that the Old Church is the oldest church in Amsterdam and started as a cross-church. It was mentioned already in the end of the 13th century and it is known that in 1309 sermons were hold in this building. The church is consecrate for Saint Nicolas and in the later years a lot of capels were added.  In 1571 the church reached his actual sizebut in 1566 the tower was already finished, possible built by Jan Jansz. Beeldsnijder. Famous is the organ and the tower became a carillon ( Bells) from the famous bronze-caster Hemony who lived in Amsterdam. In the tower is also the oldest bell, cast in 1450. 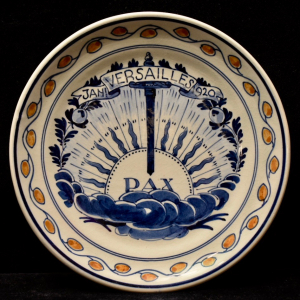 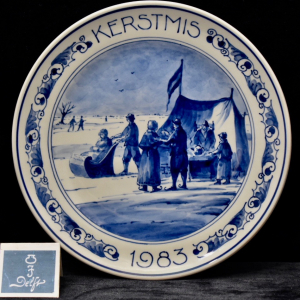 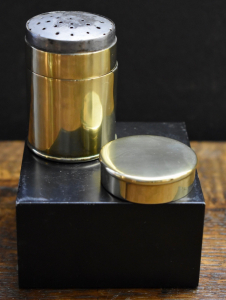